Develop your body, mind and spirit through Integrative Transpersonal Psychology

The Integrative Transpersonal Institute is an innovative, professional and human space where you can discover and explore in a safe context the therapeutic, transformative and evolutionary potential of transpersonal psychology and expanded states of consciousness, offering training, psychotherapy, workshops and from conferences an integrative approach and interdisciplinary.

Transpersonal psychology was born 50 years ago as a result of the interest of a group of psychologists, psychiatrists and psychotherapists in expanding the framework of psychology beyond its focus on the individual self and personality, including and integrating the spiritual dimension of human nature and existence. 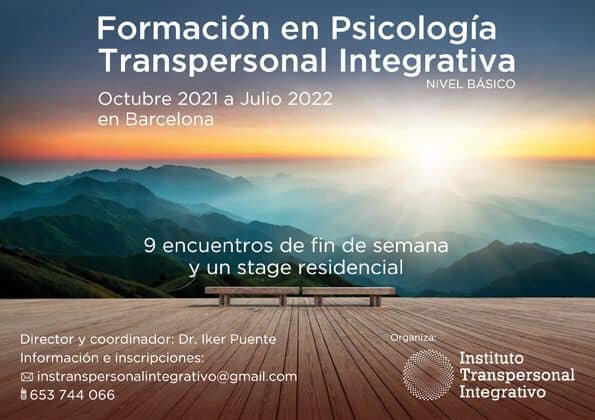 We offer a rigorous, avant-garde and quality theoretical and experiential training that responds to the growing demand and interest in this school of psychology from an integrative and interdisciplinary approach. We offer a safe and trustworthy space in which we accompany you in your process of self-knowledge and transformation from an integrative approach. In addition to psychotherapy processes, we offer integration sessions, transpersonal breathing and transpersonal coaching.

Training in Integrative Transpersonal Psychology has given me a space to work and integrate aspects of myself, not so easily approachable through other contexts or tools. It has allowed me an approach to the spiritual world from a very careful place and nurturing me from multiple experts and methods. It has also made it possible for me to take these tools to the professional field of psychotherapy, and their work from a vision of a different human being, unique and creator of their experience.

Hello! I am Iker Puente, founder of the Integrative Transpersonal Institute. I am a psychologist and psychotherapist with a transpersonal orientation, and I work from an integrative approach, the result of extensive training and professional experience. My early interest in expanded states of consciousness led me to study Psychology at the University of Deusto and discover transpersonal psychology. In the year 2000 I learned about Holotropic Breathwork, and I had an experience that left a deep mark on me personally and professionally. After this experience I decided that I wanted to dedicate myself to studying the therapeutic potential of expanded states of consciousness and the different techniques to induce them.

In 2001 I moved to Barcelona to continue my training, where I initially studied Social and Cultural Anthropology and trained in the use of expanded states of consciousness at the Society for Ethnopsychology and Cognitive Studies. After this stage, a need to integrate my experiences into expanded states of consciousness led me to train in Gestalt Therapy, delving into my emotional world and acquiring numerous psychotherapeutic tools, which allowed me to start accompanying other people in their processes of change.

In 2006 I met Stanislav Grof, I began to train with him in transpersonal psychotherapy and holotropic breathing, and I decided to do a doctorate focused on this approach at the Autonomous University of Barcelona, ​​investigating the therapeutic potential of this and other breathing techniques. At this stage I made several stays at the California Institute for Integral Studies in San Francisco, the cradle of transpersonal psychology. Subsequently, I have continued training in other approaches -body therapy, Vipassana meditation, Claudio Naranjo’s SAT program, Coaching, NLP and MDMA-assisted psychotherapy, among others- adding new resources to the tools with which I was already working in psychotherapy.

I have been working as a psychotherapist since 2008. I have collaborated as a teacher in numerous centers and institutions in Catalonia, Europe and Latin America. I regularly participate in international conferences on transpersonal psychology and related disciplines. I have published numerous articles in various specialized journals, I have been assistant editor of the ˝Journal of Transpersonal Research˝ and in 2017 I published my first book, ˝Psychedelic Research and Psychotherapy. Past, present and future.

In 2018 I decided to create the Integrative Transpersonal Institute, a meeting, training, growth and dissemination space for people who seek to learn about and nurture themselves from the transpersonal approach and the responsible use of techniques to induce expanded states of consciousness in safe contexts from an integrative approach.

I attended two transpersonal breathing workshops with Iker and his team a few years ago and they have given me insights that continue to help me deepen my process. I very much appreciated the safe and welcoming setting of the sessions, with their preparation beforehand and the final integration meeting. I felt accompanied in a very professional and friendly way in an open space to enable deep and transformative experiences. The breathing sessions were very powerful and important for my process, and the musical selection seemed exquisite to me.

Do you still have something you want to ask us? Send us a message through the following form.